The Mount of Olives played a key role in the final week of Jesus’ life on Earth.

Jesus and his followers were coming closer to Jerusalem. But first they stopped at Bethphage at the hill called the Mount of Olives. From there Jesus sent two of his followers into town. He said to them, “Go to the town you can see there. When you enter it, you will find a donkey with her colt. Untie them both, and bring them to me. If anyone asks you why you are taking the donkeys, tell them, ‘The Master needs them. He will send them back soon.’”

This showed the full meaning of what the prophet said:

“Tell the people of Zion,
‘Now your king is coming to you.
He is humble and riding on a donkey.
He is riding on a young donkey, born from a work animal.’”

The followers went and did what Jesus told them to do. They brought the mother donkey and the young donkey to him. They covered the donkeys with their coats, and Jesus sat on them. On the way to Jerusalem, many people spread their coats on the road for Jesus. Others cut branches from the trees and spread them on the road. Some of the people were walking ahead of Jesus. Others were walking behind him. They all shouted,

“Praise to the Son of David!
‘Welcome! God bless the one who comes in the name of the Lord!’
Praise to God in heaven!”

Then Jesus went into Jerusalem. All the people in the city were confused. They asked, “Who is this man?”

The crowds following Jesus answered, “This is Jesus. He is the prophet from the town of Nazareth in Galilee.”

I always wondered about the men who were dispatched to get a donkey and her colt for Jesus. How did Jesus know where this donkey would be, she would have a colt, the owner would release her just by saying the Lord needs them, and they would be sent back soon? This event appears otherworldly, mystical, out of the realm of a normal event.

I’ve always been told the choice of a donkey over a horse was significant; a horse would represent a king or ruler going into war or battle. In choosing a donkey, a pack animal, a beast of burden, Jesus enters the city humbly, with no threat, seeking only peace.

Then Jesus said to the apostles, “Remember when I sent you out without money, a bag, or sandals? Did you need anything?”

The apostles said, “No.”

Jesus said to them, “But now if you have money or a bag, carry that with you. If you don’t have a sword, sell your coat and buy one. The Scriptures say,

‘He was considered a criminal.’
This Scripture must happen. It was written about me, and it is happening now.”

Jesus said to them, “That’s enough.”

Jesus left the city and went to the Mount of Olives. His followers went with him. He went there often. He said to his followers, “Pray for strength against temptation.”

Then Jesus went about fifty steps away from them. He knelt down and prayed, “Father, if you are willing, please don’t make me drink from this cup. But do what you want, not what I want.” Then an angel from heaven came to help him. Jesus was full of pain; he struggled hard in prayer. Sweat dripped from his face like drops of blood falling to the ground. When he finished praying, he went to his followers. He found them asleep, worn out from their grieving. Jesus said to them, “Why are you sleeping? Get up and pray for strength against temptation.” 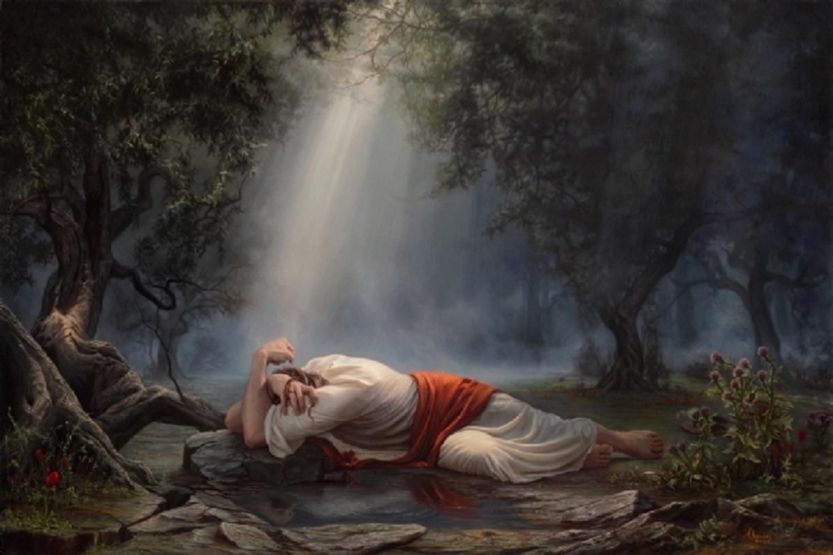 Jesus went with His disciples to the western slope of the Mount of Olives, to the Garden of the Oil Press, or the Garden of Gethsemane. It is significant to note that an oil press in Jesus’ day consisted of huge slabs of stone used to squeeze the oil out of olives that had already been crushed. These stones were surely heavy. As everything in the Bible seems to have both obvious and hidden meanings, this garden of the oil press is where Jesus agonized over His imminent arrest, criminalization, beatings, torture, and brutal death on the cross.

He prayed so intensely that beads of sweat like drops of blood were forced from the inside out. His suffering had already started as the pressure of what was about to happen pressed upon his entire body. I can imagine sins of the people past, present, and future, were too much for one man to survive; yet he endured, for our sakes, for our salvation, so that we would never suffer separation from God.

Jesus, Your sacrifice, Your suffering, Your agony, Your misery, were given out of love. A simple thank You would never suffice. No, in exchange for Your life, You invite all people to let You into their hearts, minds, and souls. So little for so much. Bless You, all Glory, Honor, and Praise, be Yours Forever.  Amen